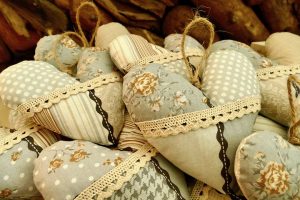 1. The popular medieval folk belief that birds choose their mates on February 14 made doves a favorite symbol for Valentine cards. The dove was sacred to Venus and other love deities and was known for choosing a lifelong mate.

Beautiful, and I love doves, but this unlikely since birds generally mate in Spring.

2. Americans spend around $277 million on Valentine cards every year, second only to Christmas.

Cool. And I always thought Mother’s Day was 2nd place to Christmas.

3. Started by a group of feminists, “Quirkyalone Day” is celebrated on February 14 as an alternative to Valentine’s Day. It is geared toward people who “resist the tyranny of coupledom.” Another alternate Valentine’s Day celebration is SAD (Single Awareness Day), which reminds people that they don’t need to be in a relationship to celebrate life.

I love the movement, but couldn’t they have named it something other than “Quirkyalone” or SAD? There’s power in a name.

4. The symbol of the ribbon, which often adorns modern-day Valentines, is rooted in the Middle Ages. When knights competed in tournaments, their sweethearts often gave them ribbons for good luck.

5. Lace is often used on Valentine decorations. The word “lace” comes from the Latin laques, meaning “to snare or net,” as in to catch a person’s heart.

So this explains why lace is so sexy.

6. The ancient Roman festival Lupercalia (“festival of the wolf”) is considered to be one precursor to Valentine’s Day. Celebrated from February 13-15, it was a purification and fertility ceremony. Reminiscent of the modern-day exchange of love notes on Valentine’s Day, boys would draw a girl’s name from a box on the eve of the festival and then escort her to the festival the next day—or, some scholars say, she would be his sexual partner for the next year.

Well, there’s a big difference between accompanying someone to a festival and becoming his sexual partner. Wonder which group of scholars to believe.

7. During the ancient Roman festival Lupercalia (an ancient precursor to Valentine’s Day), two boys would run through crowds of people swinging strings made from goatskins. If the strings touched a girl, it was divined that she would have healthy children when she grew up. The goatskins were called februa, which means to make clean and from which “February” derives.

Can you imagine all the girls running into the boys’ path in hopes of getting touched by a goatskin?

These attempts at changing the focus of pagan holidays and ceremonies took place quite often.

9. Valentine’s Day may have been named after the priest Valentine of Rome, who refused to follow Claudius II’s ban on Christianity. While he was imprisoned, children would pass him notes through the jail window. Before he was killed on February 14, he wrote one last note to the jailer’s daughter with whom he had fallen in love and signed it “From Your Valentine.

Beautiful and sad at once.

10. Teachers receive the most Valentine’s cards, followed by children, mothers, and wives. Children between the ages of 6-10 exchange more than 650 million Valentine cards a year.

Isn’t that sweet! Who knew?

11. The most popular flower on Valentine’s Day is a single red rose surrounded with baby’s breath. The red rose was the flower of Venus, the Roman goddess of love.

12. During the 1700s in England, a girl would pin four bay leaves to her pillow and eat a hard-boiled egg, including the shell, on the eve of St. Valentine’s Day. Supposedly, if she dreamed of a boy that night, she would soon marry him. Girls would also write boys’ names on small pieces of paper, cover them with clay, and drop them into the water. When the clay broke, the papers floated to the top. The first name the girls could read would predict whom they would marry.

Goodness! The foolishness women have endured, and still do. SMH

I always knew about the different colored roses, but I really learned something interesting about the other flowers.

Can you imagine the reaction if you walked out and the first bird you saw was a poor woodpecker?

15. (1 for good measure) – A common symbol of Valentine’s Day is Cupid (“desire”), the Roman god of love. The son of Venus and Mars, he was originally depicted as a young man who would sharpen his arrows on a grindstone whetted with blood from an infant, though now he is commonly presented as a pudgy baby. This transformation occurred during the Victorian era when business owners wanted to promote Valentine’s Day as more suitable for women and children.

This one was just too eerie to ignore. Dark Cupid.

I hope you’re having a fabulous Valentine’s Day 🙂