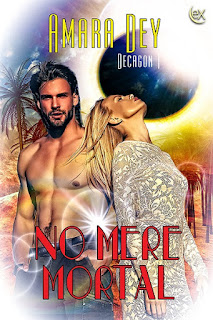 Venus Myles, orphaned at birth, is a London-based
dance teacher and unaware of her divine lineage – that is until a strange
encounter thrusts her into a world of gods and magic.

She learns from Bolt, a disgraced deity from the
planet Decagon, that she is his realm’s savior, and a passionate connection
sizzles between them.  But when Bolt
unexpectedly disappears, a determined Venus travels to Decagon to find him and
learn more about her destiny.

Assuming, of course, she can escape the powerful and
deadly witch Ansa, who wants her dead, find Bolt, and tap into her dormant
magical abilities.

And do it in time to stop an apocalypse that will
destroy her, Bolt, his world, and his kind.(https://www.amaradey.uk)

View Entire Post and Recipe on my Musings blog