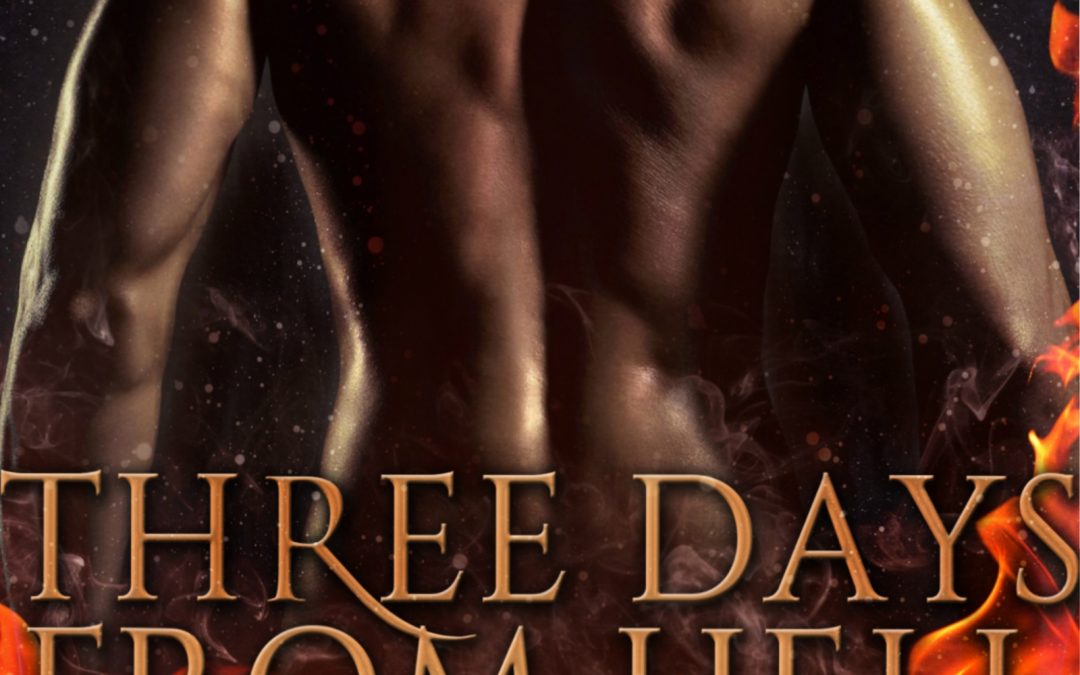 Only 3 more days before “Three Days From Hell: Kushiel’s Assassin” will be LIVE at other retailers. I’m trying something a little different this time just out of curiosity, so the story will hit your Kindles in a couple of weeks – 4/23/19. So, to kick-off our 3-day countdown, enjoy the excerpt below, and enter the giveaway. How do I enter the giveaway, you ask? There are 2 ways:

A gift, a posh bed and breakfast, and a one-night-stand with a hesitant demon on leave from Hell could be just what she needs to save her life.

Can a punishing angel, a magical matchmaker, and a few moments of passion break the chains of Hell?

Kushiel, one of three punishing angels, and warden of a special league of assassins, has many secrets. One of his best kept secrets is an assassin called Hunter.

Deemed too dangerous to live among other wards of third Hell, let alone the general population of humans, Hunter resides in an isolated corridor of Hell. Unlike most of his cellmates, Hunter is allowed short periods above-ground, three-days, to be exact, each time to rectify a horrible wrong, meting out Kushiel’s justice.

Orphaned in her teens, Anitra just wants a normal life – to feel safe – but when dark secrets rise from her past, she escapes to an exclusive resort to get away from it all.

Anitra’s inhibitions take a vacation when she meets Hunter, but can a permanent resident of third Hell be trusted?

“Good day. May I help you?” The manager addressed her again, his smile contagious.

When the couple finally walked away, Anitra re-read the instructions Joe handed her when he dropped her at the airport, then cleared her throat before speaking, attempting her most business-like tone. “I believe there’s a room reserved in my name, L’Anitra Washington.”

The manager, Dyson, glanced at the screen, his smile broadening when he looked at Anitra again, his warmth extending to Rumor as he peered over the counter and glanced at the crate. The glint in his eyes told her that he knew Rumor was there.

“Yes, Ms. Washington. Ms. Lillian has given permission for you to charge whatever you need or want to your suite. Will you require treats for your puppy?”

“N-no. Thank you.” Did Ms. Lillian tell him about Rumor, too? How does she know?

“Your key.” He handed Anitra a small envelope with the keycard. “Suite 333.”

She accepted it and walked to the elevator. She could not help wondering about the sudden glint in the manager’s eyes when he saw the suite number, but decided not to ask. The night had already been strange enough, and she wasn’t sure she wanted an answer. She took the handle of Rumor’s crate and walked away without a word, the added bonus of Ms. Lillian allowing her to charge whatever she needed to the room rendering her speechless with gratitude.

Anitra smiled as she stepped onto the elevator. Ms. Lillian’s exclusive matchmaking business, “Heaven’s Touch,” was revered and respected by any and everyone with money and power – those who knew about it, that is. No matter how grateful she was, Anitra still hoped to God her benefactor was not trying to hook her up with some clown.

She needed a man’s drama like she needed a bullet in her back a few hours ago. Plus, most men seemed intimidated by her…unless they were trying to kill her, that is. She was a big girl, and she had always been a fighter, but she had never been more frightened than she had been when she smelled the sulfur from that bullet aimed at her. Right now, she was just tired and… lonely. The voice in her head that never seemed to keep silent long enough spoke up. Matchmaking is what she does. Getting hooked up with a man is a hell of a lot better than running for your life.

She blew an errant strand of hair out of her face. As long as there was no one in her room, suite, whatever, waiting to kill her, it was all good.

Just before the door closed, Rumor whimpered and a huge hand slid inside, causing the doors to automatically stop. Heat rushed through Anitra’s body like a furnace. She glanced around to see if anyone else had been affected by the unseen force, but apparently, she was just having a young adult hot flash. At least that was what she thought until the elevator doors opened to reveal the source of titillating heat.

She covered her heart with her right hand as she gazed into the smoky gray eyes of very possibly the most gorgeous man she had ever seen in her twenty-nine years. Not a pretty man, but breathtakingly beautiful in his masculinity. Testosterone rolled off him in waves, yet Rumor did not say a word. Testosterone in any amount usually resulted in low-pitched growls and vicious, territorial barking from her four-legged best friend. Anitra glanced down at him to make sure he was still breathing. He was. Next, she looked behind her to find every pair of eyes on the elevator glued to the smokin’ hot new arrival. Of course, they all appeared to be more terrified than excited. As usual, she was the odd one out.

Over six and a half feet tall, she had to look up at the gorgeous creature joining her on the elevator. At nearly six feet herself, looking up at a man was a welcome rarity. Storm clouds brewed in his eyes, so dark they seemed to swallow the light, and his skin, dark bronze with muscles so massive his black short-sleeve T and sweats could not begin to hide them.

Her heart kicked up a few notches and she immediately understood the hot flash, stifling the overwhelming desire to fan herself. Her rational side whispered, dangerous, but the other part of her, the part she had not seen nor heard from since her father and the rest of her family were killed, not even during her ill-fated piece of a relationship, purred, Yum. Okay, I know what I said about men and their drama, not to mention my own situation being a little out of sorts at the moment, but look at him. Really? Rumor doesn’t have a problem with him, so why should I? Am I really supposed to just…?

She realized she was still staring at him when he hesitated, giving her an odd look as he stepped onto the elevator, then glanced down and clucked at Rumor. What the hell? Who are these people? She reached down and whipped the cover off the crate. Obviously, it wasn’t hiding anything.

A moment of embarrassment came and went when she reminded herself she had just survived a near death experience. Well, sort of, but whether she wanted to get technical or not, she deserved something for herself, and even though he definitely looked dangerous in a delicious kind of way, she felt connected to him somehow too, drawn by more than his sex appeal.

Her instincts had never been wrong. In fact, it was her instincts that saved her life, the reason she was not murdered along with the rest of her family. She had sensed something wrong that day and called her family’s witness protection handler, refusing to return to the apartment. Riddled with guilt for months afterward, she wandered, nearly walking into one of the henchmen Arardo hired to kill her. She lived and her family was dead. She still wondered if she could have changed things by being there, saved them somehow, the possibilities torturing her. She figured she would always wonder. Right now, her instincts and Rumor were all she had.