Wings of the Wicked Excerpts: “Arija and the Burning City” by Zachary Paul Chopchinski 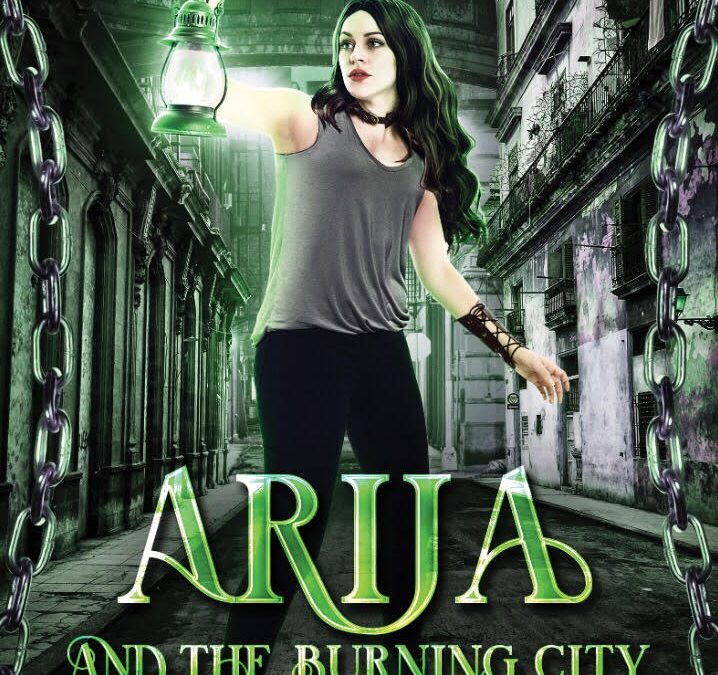 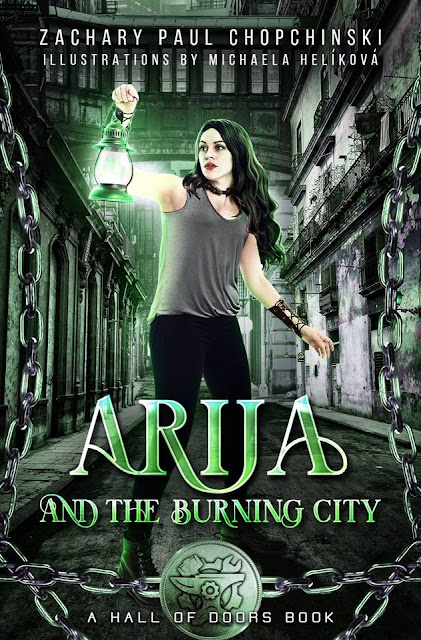 Arija and The Burning City

Blurb:
In a city of angels and demons, we learn who the real monsters are.

If Arija has to chase Kip down one more time, she just might kill him. But when she finds herself in the most beautiful city she’s ever seen, is it a paradise or is it hell?

Adal can’t believe he let Arija go into the portal alone. When he goes in looking for her, he finds himself in a hellscape. With a demon around every corner, Adal must find his girlfriend before it’s too late.

But someone watches from the shadows.

When heaven and hell collide, Adal and Arija must figure out who is there to help and who is a demon wearing an angel’s face. Will they solve the puzzle before it’s too late?

You’ll love this twisted tale reminiscent of The Labyrinth because of the betrayal, the temptation and the edge of your seat action.

Excerpt:
“Rowan, Matilda, please splay this creature out so we may start the ritual.” Ara winked as she stepped away from Adal.
“Hold up!”
Matilda and Rowan each grabbed him by the hip and swept his feet out from underneath him. As soon as he hit the ground, the sisters pinned him to the floor.
“This will be fun,” Ara said as she sauntered back over to him.
“Yeah, not that I wouldn’t find it the funniest shit ever, but I kinda need to ask you to not cut his dick off.”
Ara cocked her head to the side, her eyebrows knitting together.
Ypsilon pushed through the crowd of succubi, her hand poised over her pistol.
“You wish to spare this one his fate?” Ara asked in shock, not looking the slightest bit concerned.
Adal’s eyes lit up at the sight of his friend. Thank God for that crazy bitch! Now get me the hell out of here.
“Well, not particularly. He’s kinda a huge dick, and shaving some off might make him more tolerable, but that will put a damper on my plans. So, here’s the deal: you let my associate keep his junk, and I won’t kill all of you. Fair?” Ypsilon said with a smile.
“Who is this girl?” Matilda asked, digging her nails into Adal’s arm.
“She’s not mortal. I cannot smell her soul,” Rowan added.
Adal muttered under his breath, “You can’t smell something that isn’t there.”
“Really, Adal?” Ypsilon shot him a look of daggers. “Not the best time to be a smartass! If you want, I can wait until after your trim to save you.”
“Nah,” he grunted. “Just got it the length I like it.”
Ypsilon rolled her eyes before turning back to Ara.
Adal had to trust she would get him out of this. On her home planet, Ypsilon was chief of the smartest gang for a reason. She kicked ass and knew how to get her way. But how she planned to escape a room full of hundreds of demons was a question he couldn’t answer.
“Enough of this! Why you don’t have a soul is irrelevant. I will tear into your chest and remove whatever heart you have. Then I’ll feed it to your man before removing his juicy bits,” Ara warned, turning all of her attention toward Ypsilon.
“I don’t give warnings more than once. Let him go. If you don’t back the fuck off, I’m gonna hurt ya’.” Ypsilon took a step toward Ara. Her head came up to the demon’s shoulders.
“You foolish creature. I will teach you your place, you snarky bitch,” Ara spat.
A small smile played at the edge of Ypsilon’s mouth. It was gone so fast Adal wasn’t even sure it was real. His stomach tightened, his nerves on edge as his friend squared off with the succubus. Adal didn’t even hear the gunshot, the boom and muzzle flash almost masked by the panicked and infuriated howls of the spectating mass of succubi.
Ara’s head rocked backwards as an oily substance erupted into the air, spraying the floor all around her. Adal only noticed that Rowan and Matilda had let go of him when his arms smacked against the dark marble floor.
Ypsilon’s eyes were at half-mast as she relished in what he presumed was her first kill of the night. The look of pleasure on her face as she watched the smoke plume from the end of her gun’s barrel was enough to make him grateful she was on his side.
“God, I hate the word bitch.” Ypsilon turned and swung her gun back and forth between Rowan and Matilda who were shrieking at the death of their leader.
Everyone else in the room stood frozen.
“Anyone want a shot at the title of whore queen?” Ypsilon questioned as she looked from Matilda to Rowan and back again.
She flipped Bangarang around her finger like a pistol in a western before expertly sliding him into his holster. “What’s it gonna be, ladies?”
Matilda looked to Rowan, her lips curling into a snarl. “We will spill your blood, little girl.”
The two succubi charged at Ypsilon. “For our sister,” they shouted in unison.
She didn’t even flinch. In fact, Adal thought he could see a hint of a smile playing at the corner of her mouth. As Rowan reached her, arms outstretched like a zombie in a Romero movie, Ypsilon dropped and rolled the succubus over her shoulder, slamming her into the floor.
Matilda swiped her claws, catching Ypsilon in the arm.
“Mother fucker,” she yelled as she punched the succubus in the face. “Really? We’re scratching now?” She hit the demon with another hook to the head.
Matilda stumbled backward, colliding with several of the spectators. One woman in the crowd jumped in front of Matilda, growling at Ypsilon, but Matilda raised a hand and the woman returned to her place.
Ypsilon turned her attention to Rowan. The red-head came at her with a spin kick, hitting her in the side. Ypsilon stepped back to avoid the full hit, but tripped over Ara’s body, landing just next to Adal.
“I get that this is a thing for you, but we aren’t covered in mud or oil. How about you not be useless and help save your own ass? Remember, they kinda want to cut off your junk?”
“Shit, my bad.” Adal jumped up next to his friend. He wrestled in his pockets and pulled out his knuckles.
“Really? You need to weapon up for this one?” Ypsilon chided.
“Hey, when your dick’s on the line, let me know and we can discuss what you want to bring to the table. Until then, I’mma do me. You do you.” Adal squeezed the metal weapon.
“What Arija sees in you is beyond me.”
Arija and The Burning City

Wings of the Wicked 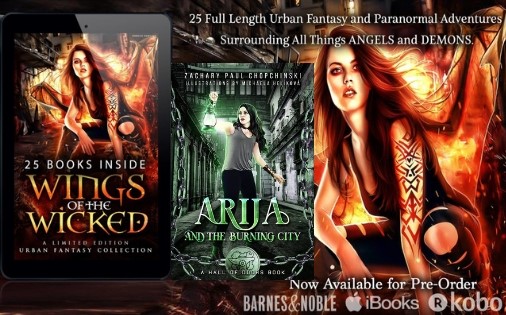