Wings of the Wicked Excerpts: “Warlock From Wales: The Cauldron Effect, Book 2” by Shereen Vedam 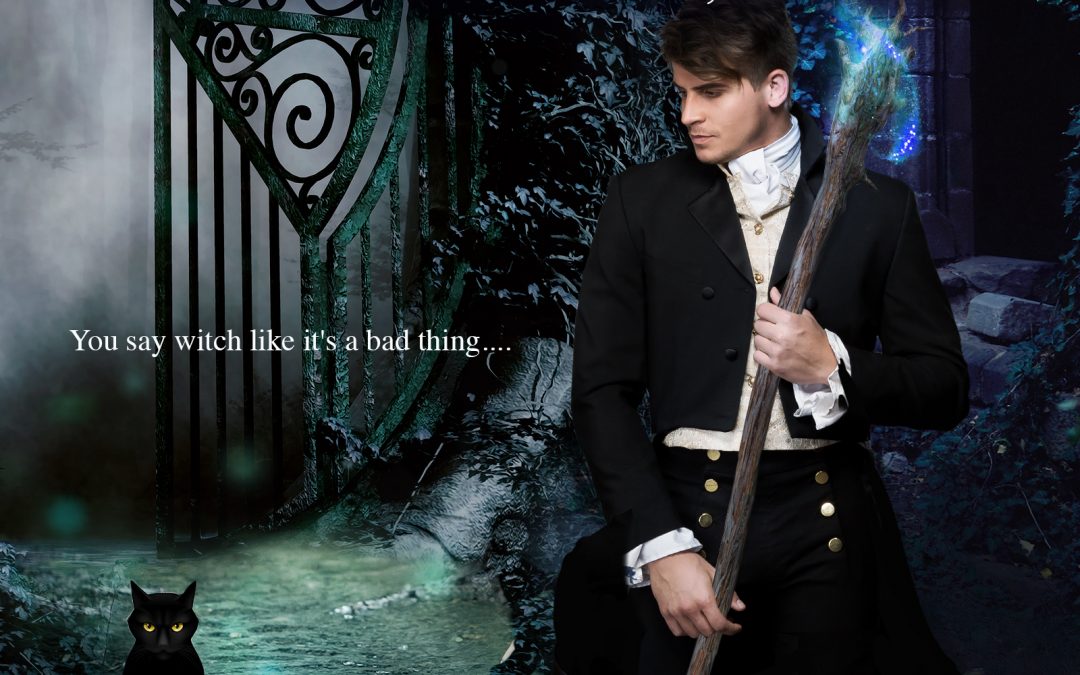 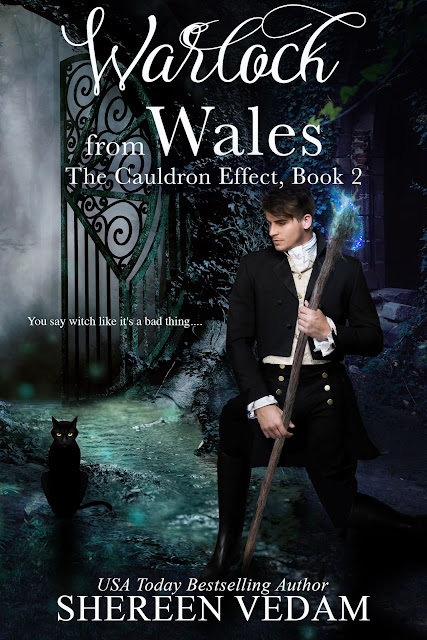 Blurb:
You say witch like it’s a bad thing.

When Hugh is yanked out of his warlock apprenticeship and summarily assigned to guard a human female, he is justly incensed.

But when a water demon snatches her from under his nose, he sets off on a desperate race to save her. and prove he is a warlock to be reckoned with.

Excerpt:
The Honorable Mary Bryght, eighteen-year-old daughter of the late Viscount Holywell, faltered and came to a startled halt. She’d been traveling through the woods to her friend’s home to deliver some astonishingly grand news about her brother. A sound drew her gaze toward a strand of willows that drank from a small pond. There, a stranger in a dark cape watched her, tapping a riding crop against his Hessians. At the malevolence emanating from him, the hairs on Mary’s arms stood to attention.
In the space of one glance, her mood shifted from cheerful to fearful. She swallowed, tasting dread, and swiftly gauged how fast she must run to reach Rose’s cottage before this stranger’s long strides reached her. She took one deep breath in readiness to sprint, when the man appeared at her side, his large hand grasping her upper arm so hard it pinched.
She cried out. He dropped his riding crop and covered her mouth with his hand, swamping her senses with a pungent aroma of horse sweat and leather.
Fifteen feet! That’s how far away he’d been. Yet, he had closed the distance between them as if it had only been two feet. Heart pounding in terror, she kicked his shin, bit hard onto a gloved finger and with her free hand, punched his throat as her father had taught her.
He grunted and loosened his grip.
Mary tore away and ran. Within a half dozen steps her body froze. There was no other way to describe the bizarre experience. She could not shift one foot, one hand, one finger. She was a statue in mid-motion.
“Now, now, Miss Bryght,” the stranger said, “such violence is uncalled for. I’ve come a long distance to find you.”
Her right foot was raised, the left poised on toes as Mary stared straight ahead. Am I still alive? She couldn’t hear herself breathing. There, a pulse tapped against her throat like the wings of a frightened caged bird.
What was happening? She felt abused and defiled, as if something dark and foul had tainted her. Was this some sort of witchery?
Villagers spoke of spells and magic. She thought such talk absurd. Even when the midwife once slyly hinted to seven-year-old Mary that a spell could be responsible for her mother’s mental sickness, she had questioned that assumption. How could a spell take away her mother’s memories, her speech, everything that made her who she was?
Science, my dear, not superstition, her father had said when she’d asked him about it, can explain the cause of all illnesses, given time.
Now she questioned his certainty. This pause in time did not feel like an illness. Could this man be a witch? How did he know her name?
“I have a message for your brother.” He shifted to stand directly in front. He was tall. From her motionless position, suspended slightly forward, only his voice box was visible.
Too bad her punch hadn’t broken it. She must get Marcus to train her to improve her strength. If she lived to see him again. Her dry eyes ached with unshed tears.
“Listen carefully.” The witch bent to make eye contact. Brown eyes. Determined. Pitiless. His gaze was eminently human, not red or glowing.
“I shall say this once, Miss Bryght. Your brother is to refuse His Royal Highness’s request. You will convince him to do so. Do you understand?”
Mary stared in stunned silence. This was about the painting? A witch had spelled her because the regent commissioned her brother to do a watercolor mural?
Old village gossip resurfaced. This was not a witch. Men who practiced black arts were called warlocks. Women who practiced such vice were witches. Was this man a warlock then? Shudders raced up her body until her mind went dizzy. If she could move, she was certain she would faint. Was this how her mother had felt near the end? Powerless.
Something tinged with green flashed behind the warlock. It went by so quickly she hadn’t seen it clearly but Mary received an impression of sharp, almost fang-like teeth, and horror cooled her skin like a bath of ice.
Warlock from Wales
by
Shereen Vedam
@ShereenVedam
featured in
Wings of the Wicked
A Limited Edition Urban Fantasy Collection Kindle Edition 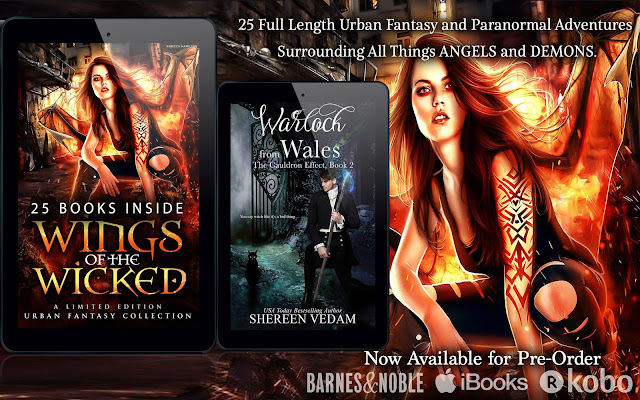